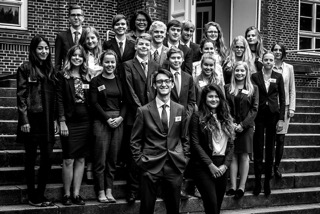 “Do you want to start debating the resolution or do you want to do gossip first?”, the chair asks. “Gossssssiiiiiiipp”, the committee shouts back like a choir. Well, ‘improving international efforts to prevent terrorist attacks by terrorist cells and single perpetrators’ is put off for a few more minutes. Now that the delegates feel satisfied with the secrets that they have revealed about one another, Russia is allowed to approach the floor. As the main submitter, the delegate of Russia now gives a passionate speech to convince fellow delegates to increase surveillance of social media and to install a unit to create counter-propaganda (!!) against radical Islamism – in other words “to fight fire with fire” (gossip: Russia will never be a fireman). The fact that this unit is supposed to be based in Russia itself ignites resentment in Columbia, which will later on lead to an amendment to strike this specific clause. Furthermore, Russia suggests that the counter-propaganda should correspond with “democratic and Synodal Bible values” and this Bible should also be called “the best Bible”. However, this passage does not go well with the opinion of other delegates, like the South Korean one, and therefore it clearly fails in the voting procedures. In the process of debating the resolution Russia does not fail to mention though that the US cannot be trusted, and the UK wants to know what kind of drugs Russia is taking, forcing the chair to intervene. Syria, Pakistan and Iran, however, speak in favor of the resolution as a whole and combined with Russia’s eloquent metaphors there is no chance to table it anymore, which is why the debate will have to continue on the next day.